Forbidden Beauty: Women's Dances of the Peoples of Afghanistan

Today we have come to associate Afghanistan with war and destruction. What has happened to our perception of Afghanistan as an ancient country, rich in natural and cultural beauty? From the unification of the country under Amir ‘Abdurahman in 1880 until the Soviet invasion in 1979, Afghanistan was blessed with a century of stability and prosperity. During this period trade and education developed, as of 1959 women began to emancipate themselves, and music, dance and textile arts blossomed. The rich culture of Afghanistan, which stretches back thousands of years, can be experienced through dance, music, dress and poetry. With this program, we would like to breathe new life into images of festivities and day-to-day life, which demonstrate the cultural richness of the country. At the same time we hope to awaken curiosity and hope for the future of Afghanistan.
Afghanistan is a multicultural land, which lies on the crossroads of major civilizations. Due to its borders with China, Pakistan, Iran and the Republics of Tadjikistan, Uzbekistan and Turkmenistan, the cultures of Afghanistan have many faceted influences. The major ethnic groups are the Pashtuns, the Dari speaking Tadjiks and Farsiwan, the Turkic speaking Uzbeks, Turkmen and Kirghiz, the Mongolian influenced Shiite Hazara, the Balochis and the Nuristani, who converted to Islam only in the 19th century. All these peoples have different languages, social structures, textile arts, music styles and dances.
During the rule of the Taliban no one was allowed to dance, neither men nor women, neither in public nor in private. This was not always the case. Although women did not dance in public, they danced beautifully while in the company of other women. Dancing boys performed for the eyes of men, both in the Chaikhana (tea house) as well as at fairs and weddings. Because it has recently been impossible to conduct dance research in Afghanistan, many dances for this program have been taken from the neighboring countries, in which the same ethnic groups are found as in Afghanistan (i.e. Pakistan, Iran, Turkmenistan, Uzbekistan and Tajikistan). 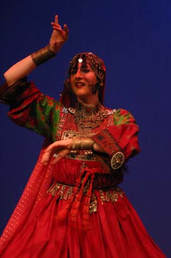 ​Logari-Dances of the Pashtuns
The Pashtuns are not only the largest ethnic group in Afghanistan, but also the dominant political group. They live divided more or less in equal parts between southern Afghanistan and Pakistan. A large part of the population is still nomadic. Tribal identity is very strong among the Pashtuns. The dancers from the Logar Valley south of Kabul were renowned throughout the country. These Pashtun dancers were famous for their shy yet coquette performances in which they froze suddenly during the dramatic stops in the music. The main musical instruments are the stringed instrument Rabab and the ceramic chalice drum Zerbaghali, which is accentuated by the bells on the ankles of the dancers. 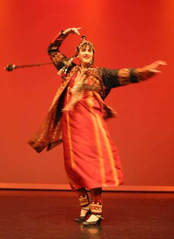 Turkmeni
The Turkmen are originally a nomadic people, which wandered through the regions of northeast Iran, northwest Afghanistan and the ex-soviet Republic Turkmenistan. Today Turkmenistan is an independent state like Uzbekistan and Tadjikistan. The Turkmen, like the Uzbeks, had a positive impact on Afghani economics, due to their animal husbandry and carpet weaving. Because of their nomadic lifestyle, their dances were first brought to the stage during the soviet era, when staged dance styles were created analog to other soviet dance styles. 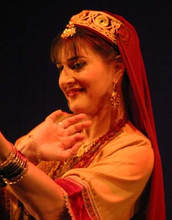 Herati
"Khorasan is the oyster shell, and Heart is her pearl.” This saying stems from a time in the 15th century, when Heart was the capitol of the immense Timurid Empire and the cultural center of the Persian-speaking world. Today the Herati view themselves as quite different from the Iranians. Only about 10% of the population is Shiite (as opposed to the majority of Iranians). The Farsiwan speak the Iranian language Dari and are much less homogeneous than the Pashtuns. Their identity is more strongly influenced by their locality than their tribal identity. In the cities they often work as artisans and tradesmen. In the countryside they live as farmers. 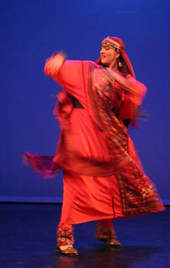 Balochi
The tribes of the Balochis inhabit the arid desert regions of southwestern Afghanistan, southwestern Pakistan and southeastern Iran. This dance, in which the women beat the rhythm with their massive silver bracelets, was presented by the state folkdance Ensemble during the Pahlavi Epoch in Iran. 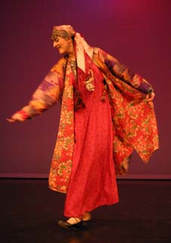 Uzbeki
Approximately one 1/8th of the population of Afghanistan are Turkic. The Uzbeks are the most numerous of these Turkic peoples. Several waves of Turkic speaking refugees came to Afghanistan at the beginning of the Soviet Union in the 1920’s and 30’s. They brought there sheep herds and their artisan know how with them and had an extremely positive effect on the Afghani economy. Strategically located on the silk route. The Khanates of Samarkhand, Bokhara and Khiva were once the cultural center of the world at a time when Europe was still in the “darkness” of the Middle Ages. Avicenna, the father of modern medicine, came from Uzbekistan. The mathematical term “Algorism” is named after the Uzbek scholar Al-Khorezmi (from Khorezem). Today the ex soviet Republic of Uzbekistan is an independent state. The Uzbek are masters in the weaving of the complicated and colorful technique of Khan-Atlas (Ikat) weaving. 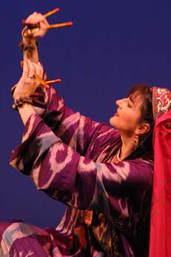 Tadjiki
​Tadjikistan is situated on the northeast border of Afghanistan and was formerly a Soviet republic. Now it is an independent nation, which also borders on China, Uzbekistan and Kirghizistan. There is a large number of Tadjiks in northern Afghanistan. Although the Tadjiks speak an Old Persian language, their dances have many similarities with their neighbors the Turkic Uzbeks. Expressive facial and hand gestures, lyrical movements and dizzying spins characterize the dances of Central Asia. The costumes, whether made of Khan-Atlas-silk (Ikat) or embellished with rich embroidery, mirror Central Asia’s important position on the ancient silk route.