​Dances of the Ghawazi from Upper Egypt 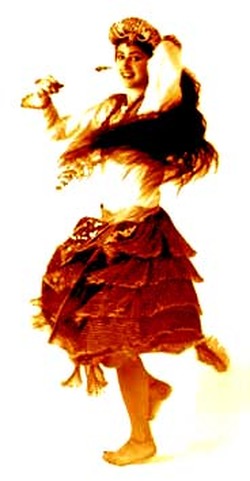 Ghawazi mean "conquerors" and refers to the most traditional female dance performers of Egypt. In this case however, it is the hearts of the men which are to be conquered. The Ghawazi belong to the Nawar ("Gypsy") tribe, who also inhabit Syria and Lebanon. The women of the Nawar are dancers and courtesans, while the men work as musicians and managers. Formerly the Ghawazi lived throughout Egypt, but in the 1830s Mohamed Ali banned them from Cairo to Upper Egypt. It was there that many 19th century travelers saw the Ghawazi and were fascinated by them. When the Ghawazi appeared at the Chicago World's Fair, they let loose an oriental dance fever, the repercussions of which are felt until today. The art of the Ghawazi today is on the brink of extinction due to fundamentalist pressure. In this workshop we will learn basic dance movements as well as about the development of the Ghawazi costume. Playing the finger cymbals, Sagat, is an obligatory element of this dance style. Students who have them, should bring finger cymbals.