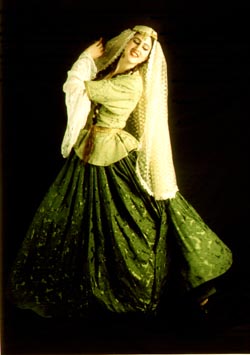 ​Azerbaijan was once one of the Soviet Caucasian republics. Today it is an autonomous state, which has drawn international attention due to its rich oil reserves. A large number of Azeris also live in northwestern Iran in the region of the city Tabriz. The women's dances of the Caucuses are characterized by lovely hand and arm gestures and often by tiny steps, which danced under a floor length skirt, create the illusion that the dancer is floating. The dances -- sometimes sad, sometimes fiery -- are always lyrical and express the natural pride of the Azeri women. The solo and group dances were originally simple dances, danced at weddings and other festivities. In the ex Soviet Union they were developed into artistic stage dances.  Dances can also be accompanied by unusual hand percussion instruments:  sets of tea glasses or saucers with finger thimbles.