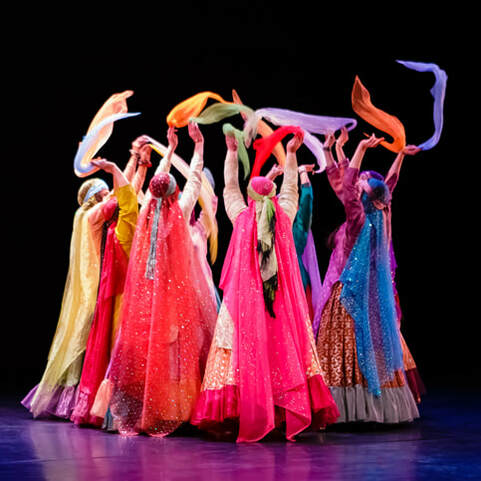 This workshop provides an introduction to several regional folk dances of Iran, including:
Gilaki: Gilan is a region in northern Iran on the southern coast of the Caspian Sea. The mountains, which thrust upwards directly behind the coast, cut off this subtropical region from the dry, high plateaus of central Iran. Due to profuse precipitation, Gilan is a swampy region, in which the houses are built on stilts and the roads on dikes. Wheat, and an especially fragrant rice are cultivated here. This plays an important role in the dancing: sowing, harvesting, winnowing and gleaning of the grain are represented through pantomime. Students should bring a small tray.
Bandari: The population on the Persian Gulf lived originally from fishing and pearl diving. Because of its location on the Gulf, the costumes, music and dance etc., are influenced by many elements: next to Iranian influences, we find Arabic, Indian and also African elements. Dancing is accompanied by bagpipes and hand clapping.
Qashqa'i: The Qashqa'i are a nomadic, Turkic people who wander in the southern Iranian province of Fars, near the city of Shiraz. They are well known in the West because of the very popular Gabeh carpets that they weave. The women wear incredibly colorful glittery clothes, with many full skirts one on top of the other, even to perform everyday tasks such as herding goats, milking, cooking and weaving. The dance music is played by a shrill double reed instrument Sorna and a small double drum played with sticks. The dance Raqs-e Dastmal is characterized by the waving of colorful scarves. Students should bring two small scarves.