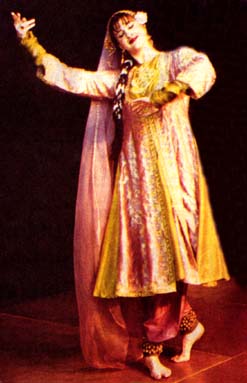 ​(Live-Tabla-accompaniment possible)
Kathak is a classical Indian dance form, which developed as entertainment in the courts of the Mogul Dynasty of northern India. Especially interesting in this style is the melting of Hindu and Muslim elements. The origins of Kathak lie in the performances of traveling bards, the so-called Kathakas or "story tellers." In the courts the art of the Kathakas was patronized and developed. Today pantomime, virtuosic spins, expressive mimicry and very fast, rhythmic footwork characterize the dance. The students should bring gungaroo (ankle bells) if they have them. Kathak is danced both by men and women.