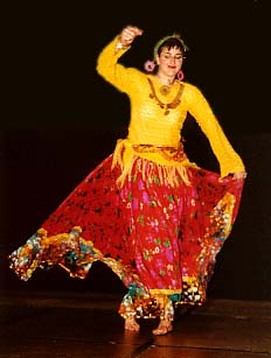 ​The northern border for dances with hip emphasis in Europe seems to be the Danube Basin. The dance Manea is danced by Roma in Oltenia and around Bucharest along the northern rim of the Danube Basin. Under Ceaucescu Roma were not allowed to perform their music and dances in public. Although Roma were highly in demand as musicians in ensembles and restaurants, they were required to play Romanian music. Because of this, Helene was pleasantly surprised to find this dance in 1993 in Caracal, Oltenia at a dance festival. Both men and women, with the typical finesse that is characteristic for the dances of the Roma in the Balkans and Turkey, dance Manea. Since the 1990's Manea has become both hyper popular as a form of very commercialized and hyper sexualized music and dance and has therefore taken on much criticism.  In it's simpler form it is now popular in a wide area of Romania at parties and celebrations.